Since December 2010, the Climate and Energy Fund’s Smart Cities initiative is making crucial contributions in supporting Austrian cities on the edge of energy- and mobility-transitions. During the initial programme phase in autumn 2010, it enabled the formation of consortia with transnational networking for vision and concept development. In 2011 it funded first Smart Cities pilot and demonstration projects in Austria’s cities and urban agglomerations.

Due to these preparatory efforts and achievements, Austrian stakeholders are now seen as competent partners for EU research projects throughout Europe, for the initiatives of the European Commission as well as transnational cooperations and networks. In order to build on this success and to further support the Europe-wide positioning of Austrian research institutions and companies, the Austrian Federal Ministry of Transport, Innovation and Technology is starting the new RDI programme under the name of “City of the Future”, which will feature a strong transnational component from the very beginning and will be coordinated with “Smart Cities Demo” to best integrate Austrian urban-related RDI into the European RDI landscape. Another initiative in this field is the Joint Programming Initiative Urban Europe, which has a more systems-oriented approach, endeavouring to embrace the complexity of urbanization in all its breadth (see www.jpi-urbaneurope.eu for more information)

Horizon 2020 is a success story with high added value and proven benefits for Europe. This is the result of an interim evaluation of the programme and is also reflected in a large number of successful examples. The successor programme, Horizon Europe, will continue to support the entire research and innovation cycle. It will encourage a stronger involvement of citizens and more clearly communicate the positive impacts of research and innovation, such as progress in the health and environmental sectors. In order to achieve this, the programme also incorporates “missions” with clearly defined targets. Horizon Europe will start on 1 January 2021 and end on 31 December 2027. In May 2018, the European Commission presented its proposal for the Multiannual Financial Framework (MFF) for the 2021-2027 period. Funds totaling 100 billion euros are earmarked for research and innovation: 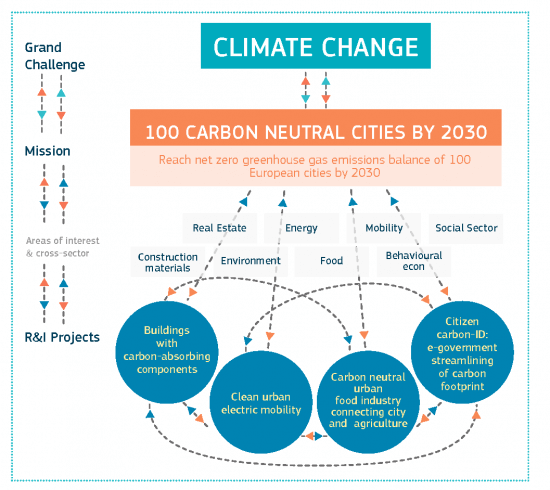 From challenges to missions image: RTD-A.1 based on Mazzucato (2018)